On the occasion of the ISIS march on Baghdad, I’d love to be able to say ‘I told you so’ to all of those who voted for Barack Obama. But stop…he’s not the one who put us in this situation. Remember, the original status of forces agreement called for withdrawal by 2011, and was signed by President Bush. Plus, Obama campaigned in 2008 promising a US withdrawal from Iraq. He delivered on the promise.

I’m no fan of Obama foreign policy. Is it sinister, or just inept? But don’t blame this one on him.

The first Iraq war was, relatively, a jewel of restraint and competence. Bush 41 was our last WW2 President, maybe his wartime experience provided a sense of caution. Was Bush 43’s approach to Iraq driven by a need to one up his father? What went wrong with the second Iraq war and the occupation?

There is a silver lining: hopefully we take this as a lesson, and work harder to reach an agreement with the Afghani government that provides for a responsible, safe transition.

Germany and Japan made it look easy

Good results with the postwar occupation of Germany and Japan may have tricked us into thinking we could do it again; but it seems success in that case was unique and not easily reproducible. A paper by Jesse-Douglas Mathewson lists eight factors affecting the success of an occupation.

Mathewson says that in nearly every one of these factors, Japan and Germany in 1945 presented better odds for success than Iraq.

President Obama’s foreign policy record provides little hope that he has the intellect and character to respond appropriately. He has antagonized our friends and encouraged our enemies. Consider: in 2008 the UK, Israel, Germany, and Saudi Arabia were among our top allies. Each of them is now disenchanted.

What should we do? Talk with our regional allies. Get them to find a strategy where they can lead, and we can play a supporting role.

Lots of upset recently about money in politics, probably related to two recent Supreme Court decisions, Citizens United and McCutcheon. Most of the comment is about spending by corporations and wealthy individuals; and most of it comes from the left. For example, Senator Bernie Sanders on 4/2/14: “Freedom of speech, in my view, does not mean the freedom to buy the United States government…What world are the five conservative Supreme Court justices living in?…To equate the ability of billionaires to buy elections with ‘freedom of speech’ is totally absurd. The Supreme Court is paving the way toward an oligarchic form of society in which a handful of billionaires like the Koch brothers and Sheldon Adelson will control our political process.”

It’s an even race
But what’s the beef? Democrats do well in the money race. According to the New York Times, in the 2012 presidential campaign the Obama campaign received 8% more than the Romney campaign. Alongside corporations and individuals, labor unions are also political spenders. Their contributions go unmentioned, and almost all of the union money goes to Democrats. According to the Wall Street Journal, from 2005 through 2011 unions spent $4.4 billion dollars on political activity: $3.3 billion in spending reported to the Labor Department, plus another $1.1 billion reported to the Federal Election Commission. The union money goes heavily to Democrats (92/8), while spending by corporations splits more evenly (55/45). I can’t find a clear comparison of union versus corporate political spending, but a Washington Post column discussing 2010 filings reports unions outspending corporations seven to one.

It’s self-defence
Why the surprise about all the money flowing into politics? For some, this money is self-defense. If groups and individuals had no need to push back against government interference in their affairs, the motivation to spend would be less. The US tax code grows on a path that seems geometric. See this handy chart from the tax services firm CCH: 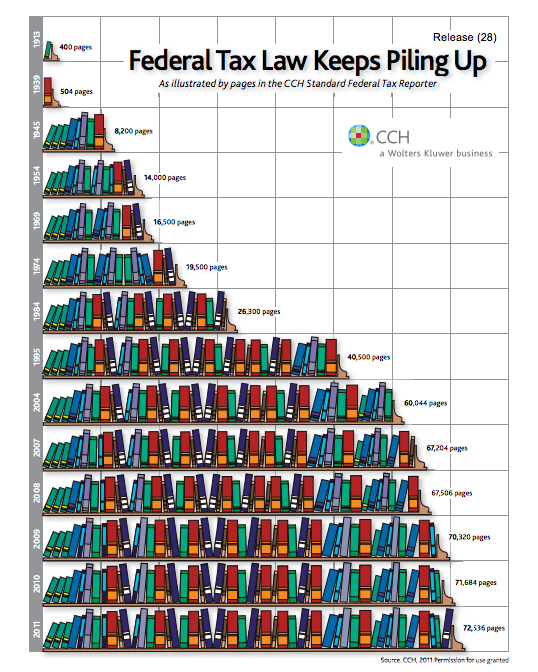 Growth in federal regulations follows the same trend. The Federal Register publishes government agency rules and public notices. In 1936, it was 2,620 pages. In 2012 it was 78,961 pages. That’s a thirty-fold growth over 76 years.

Go ahead, ban spending
So if you totally ban spending on campaigns, what does that get you? The pain that motivates campaign spending has not gone away, so the money will just find a different path to influence, and the money flows will probably be harder to see and control.

Paths to influence
Take a look at four ways money is used today for political influence.
1. Donations to candidates and parties. For example, your $25 to a Seattle city council race.
2. Donations to politically active non-profits, like the NRA or Planned Parenthood.
3. Direct spending, like get out the vote spending, Michael Moore and his movies, or Tea Party ads on TV.
4. Lobbying. This is where it gets tricky. Consider how it is that legislators in D.C. get so wealthy so quickly. Consider all the money that goes to lobbying firms, and how many former legislators and staff go into lobbying when they retire from elective politics.

If the utopian ideal of publicly-financed, money-free elections is achieved, the money forced out of elections will go into lobbying. And we won’t be able to track it. If a congressman’s sister gets a first in line spot on an IPO, or a staffer’s cousin gets a great price when they sell their house, how do you identify that as quiet influence on legislative language? You can’t shut the money off, you can only force it underground. No, we’re much better off allowing the money to flow openly in elections.

The bottom line…
• Candidates on the left and right each have their own favorite sources of cash, and neither party seems to have much of an advantage.
• Leave the spending out in the open where it contributes to the debate and can be monitored. If we limit the spending without changing the pain that motivates it, the spending goes underground. Choose your poison.