This is the fifth installment in my intermittent series of articles that answer the question ‘what is a liberal?’ The previous four articles are these:

Liberals believe that for big problems, the solution lies with the government. Can’t make your loan payment? Government will bail you out. Lost your job? Government will provide unemployment compensation. Can’t pay your doctor bill? Sign up for Obamacare. Local police are meanies? The Department of Justice will send a team to investigate, and on, and on. To quote Barack Obama: ‘If the people cannot trust their government to do the job for which it exists – to protect them and to promote their common welfare – all else is lost.‘ It reminds one of the old saying: ‘If your only tool is a hammer then every problem looks like a nail‘.

Look around. Oil companies guzzle down the billions in profits. Billionaires pay a lower tax rate than their secretaries, and Wall Street CEOs, the same ones the direct our economy and destroyed millions of jobs still strut around Congress, no shame, demanding favors, and acting like we should thank them. Does anyone here have a problem with that?

Unfortunately, experience shows that government really is not very competent. The list of failures renews itself constantly. The web site of California legislator Kevin McCarthy provides some handy examples:

Last month, the FDA finally approved the use of a second 3-D imaging system, which can improve the detection of breast cancer in women. Multiple 3-D imaging systems have been used outside the U.S. for years. The lack of access to multiple systems in the U.S. has meant fewer diagnoses and higher costs.

A non-partisan study last year found that the average government processing time for an interstate natural gas pipeline from pre-filing to certification was 558 days. The government’s failure to approve energy infrastructure projects in a timely fashion means higher energy prices for families and businesses.

In August of this year, an individual requesting a hearing to review a decision made by the Social Security Administration regarding their eligibility for benefits faced an average wait time of 7 to 22 months (depending on where in the country they live).

Before Congress enacted reforms earlier this year, it could take from 10 to 15 years for the Corps of Engineers just to complete a feasibility study for a flood control or navigation project.

It can take more than a decade to acquire all the government permits for a mineral production project. According to one report, the United States currently ranks last, along with Papua New Guinea, in permitting delays out of the twenty-five major mining countries.

A recent non-partisan study found that nearly half of the Social Security Administration’s scheduled continuing disability reviews for children with mental impairments were overdue, and an estimated 205,000 were overdue by more than 3 years.

Washington State taxpayers are following the saga of the M/V Tacoma, a ferry owned by the state-run ferry system. The Tacoma departed from Winslow on 7/29/14 bound for Seattle. Since it was carrying passengers and vehicles on a scheduled run, you’d think it was in good repair, preventive maintenance all up to snuff and so on. However, a few minutes into the run it lost power, and was towed back to the dock. Months later it was announced that repairs would cost $1.8 million and the vessel would be out of service for a year. So, if the problems were that severe, why was the Tacoma allowed to even leave the dock? I’m also wondering why the state is in the ferry business.

The federal government’s flagship social welfare program is unofficially named the War on Poverty, launched by Pres. Lyndon Johnson in 1964. The goal was ‘the elimination of poverty and racial injustice‘. No one claims racial injustice is eliminated, so cross that one off. Poverty? Gary MacDougal summarized the result from decades of spending in a Wall Street Journal editorial:

Including state-level programs, annual government spending on these programs is almost $1 trillion. Dividing $1 trillion by 46 million shows an average of $21,700 for each American in poverty, or nearly $87,000 for a family of four. That’s almost four times the $23,850 a year federal poverty line for that family. While not practical, a cash payment of that amount would lift everyone in poverty well into the middle class. Clearly we are not getting the results we should from this enormous level of spending.

The following chart provides another view of the effectiveness of anti-poverty spending, from Wikipedia. 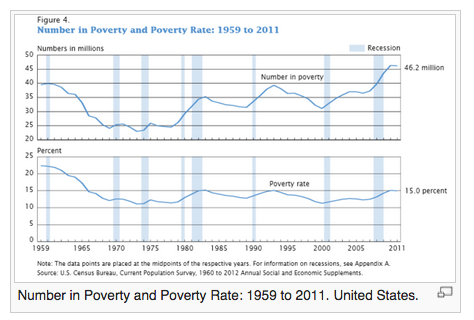 Note there is a decline in the poverty rate in the eleven years between 1959 and 1970, but then in the following 40 years, no progress. Trillions on trillions of dollars, and that’s what we get.

When you rely on government to solve problems, there’s also the problem of subsidiarity. The principle of subsidiarity holds that ‘nothing should be done by a larger and more complex organization which can be done as well by a smaller and simpler organization.‘ When subsidiarity is violated, the result is a loss of initiative and accountability at lower levels, and in individuals. Think of why it’s good to delegate authority to the front lines. When too much authority is held higher up, it’s never a good thing.

Liberals believe government solves problems. However, government tends to be wasteful and is often incompetent. Relying on government erodes authority and accountability at all levels of society.

Increasing the minimum wage is a continuing favorite of progressives, usually proposed as a way to boost the economy and improve conditions for low-wage workers. It is probably not effective at either.

A minimum wage is a price control. It sets the minimum price for an hour of labor. The history of price controls shows clearly that they are not effective. Wikipedia summarizes the point: “economists usually agree that price controls don’t accomplish what they are intended to do and are generally to be avoided”. Price controls have a long history, beginning with the Emperor Diocletian and continuing today with rent control in New York City and electricity pricing in California.

The real tragedy of minimum wage laws is that they are supported by well-meaning groups who want to reduce poverty. But the people who are hurt most by high minimums are the most poverty stricken.

The reason price controls and minimum wage rules don’t work is that they try to control markets. You may as well try to repeal gravity. Labor is bought and sold in a market, and the labor market is driven by supply and demand. See the following chart. 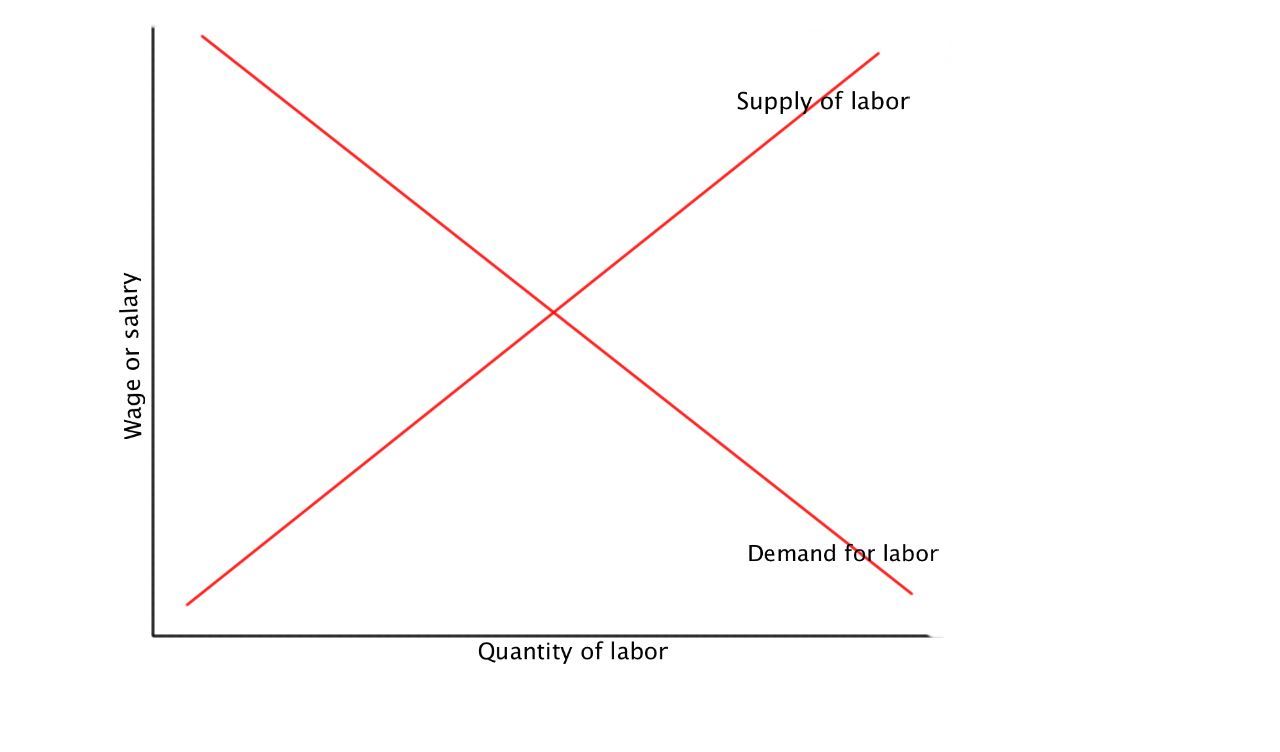 When wages are high, demand for labor tends to drop. When the supply of labor is high, wages tend to drop. Further, if workers don’t produce enough to justify their wage, firms tend to not hire at that wage. If additional labor is profitable, firms tend to buy more labor.

Two reasons why labor price control fails is that 1. You can’t force employers to buy labor, and 2. You can’t prevent employers changing the way labor is used. It’s common for employers to respond to the minimum wage by increasing the productivity of the existing work force: typically by allowing attrition to shrink the work force, or automating tasks, or both.

For example, in the past when I visited the Brown Bear Car Wash near the Ballard Bridge, there were never less than two guys on duty, often three. I drove down there last week and now there is an automated kiosk where you swipe your credit card, then use menus to select your car wash. A single employee runs the whole show.

Lowe’s home improvement stores announced recently it will test ‘two autonomous retail service robots in an Orchard Supply Hardware store in midtown San Jose, California’. The robots will ‘assist customers to quickly navigate stores by directing them to specific products and providing real-time information about product promotions and inventory. In the coming months, OSHbot will also be able to communicate with customers in multiple languages and remotely connect with expert employees at other Orchard stores to answer specific project questions.’

President Obama in his 2014 sate of the union speech, called for a rise in the national minimum wage from $7.25 to $10.10.  The CBO  evaluated this proposal, and ‘estimates that raising the federal minimum wage from its current level of $7.25 an hour would raise the incomes of low-wage workers who remain employed while lowering the incomes of low-wage workers who lose their jobs. CBO’s “middle” estimate is that a $10.10 minimum wage would reduce total employment by about 500,000.’

Duke University and CFO Magazine conduct a quarterly survey of chief financial officers. The press release for the most recent survey is titled ‘Minimum Wage Hikes Would Lead to Fewer Jobs, More Machines’. A quote: ‘Chief Financial Officers from around the world were interviewed and the majority of them concurred: a minimum wage increase from $7.25/hour to $10.10/hour would kill a significant number of jobs.’ 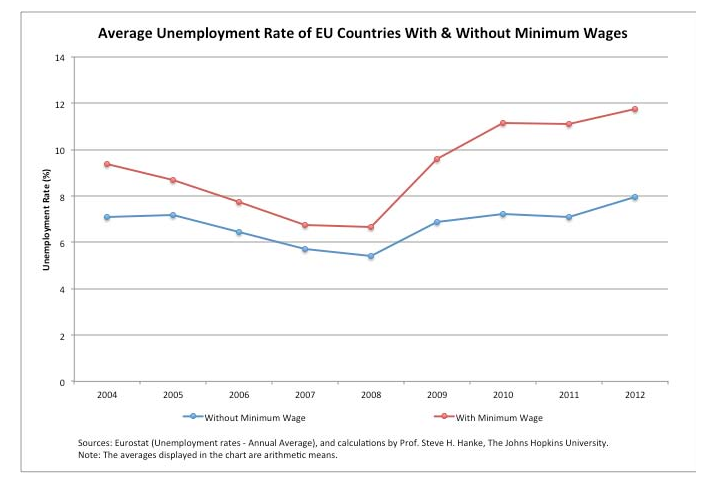 If we want to be effective in helping workers move up the pay scale, there are better choices than price controls.

Is it work that liberals are hostile to, or just low-wage work? The hostility is a liberal unicorn: a fantasy world where everyone is above average, and regardless what the question is – government is always the answer. Why is it that liberals are so hostile to Wal-Mart and McDonalds? Is it because they put so many small firms out of business? Probably not. It’s more likely the hostility comes from the fact that Wal-Mart and McDonalds provide lots of jobs at relatively low wages.

The mayor of Washington DC recently vetoed legislation that would force the District’s largest retailers to pay their workers significantly more. His veto was criticized as ‘choosing the potential for jobs and development at home over joining a national fight against low-wage work.’

Hostility to low-wage work is unrealistic, and deprives unskilled workers a chance to get into the work force and get job experience. Liberals like to complain that America is not the land of opportunity. Maybe this is related to constantly strangling the golden goose that provides the goodies.

When liberals campaign in favor of an increase in the minimum wage, they create the illusion that workers will get a pay raise. In the short-term…maybe; but over the longer term the current job is either changed or it disappears. What’s the benefit to the high school kid that used to work at Brown Bear, or the veteran working the aisles at Lowe’s? Raising the price of their labor may put them out of a job.

There’s a little white horse you can ride of course

You can jump so high you can touch the sky

In the Big Rock Candy Mountains.

Minimum wage advocates are either cynical exploiters of the ignorant, or they’re fantasists. You can raise wages, but raising wages harms more people than it hurts. If the goal is to boost real income for low-wage workers, there are better ways: training, subsidizing employers, subsidizing low-wage workers.