The Arab Spring seemed a wonderful thing at the time: a pro-democracy uprising against dictatorial regimes, often in place for decades. Many of us in America cheered, and the President spoke favorably, saying it was “a historic opportunity…to pursue the world as it should be”. But there was an immediate problem: many of those dictatorial regimes were American allies of long standing, and important to our influence in the region. The Arab Spring seemed wonderful and hopeful, from a distance and at first glance. Without thinking deeply about what’s next. Like yelling for the coach’s head, without thinking of who’s available to take over.

What followed the Arab Spring? See here, using rankings from the watchdog organization Freedom House. The numerical ratings go from 1 to 7 where 1 is best, and 7 is worst.

You can see that Tunisia succeeded at achieving a free and democratic society, while the other countries all failed. The Freedom House rankings don’t fully express how bad the results are: two of the Arab Spring countries, Yemen and Libya, no longer exist as states with effective borders and central governments.

In a not un-related event, the Arab Spring was preceded by President Obama’s famous apology tour, featuring these five abasements:

“In America, there’s a failure to appreciate Europe’s leading role in the world. Instead of celebrating your dynamic union and seeking to partner with you to meet common challenges, there have been times where America has shown arrogance and been dismissive, even derisive.”

“Another issue that confronts all democracies as they move to the future is how we deal with the past. The United States is still working through some of our own darker periods in our history.”

“While the United States has done much to promote peace and prosperity in the hemisphere, we have at times been disengaged, and at times we sought to dictate our terms.”

“Don’t be discouraged that we have to acknowledge potentially we’ve made some mistakes. That’s how we learn.”

“Unfortunately, faced with an uncertain threat, our government made a series of hasty decisions. … I also believe that all too often our government made decisions based on fear rather than foresight; that all too often our government trimmed facts and evidence to fit ideological predispositions. Instead of strategically applying our power and our principles, too often we set those principles aside as luxuries that we could no longer afford. And during this season of fear, too many of us — Democrats and Republicans, politicians, journalists, and citizens — fell silent. In other words, we went off course.”

Now we have the controversy over whether the US is really at war with Islamic radicalism, or just radicalism, and Rudy Giuliani’s response that Obama doesn’t love America.

All of this represents a clear change in US policy. Clear in the sense that it’s a policy change; but not clear in being part of an election platform, or clearly stated by the President. AFAIK. I didn’t do the research, but I know I’m puzzled by it and I believe others are too.

The new policy seems to be that on the one hand the US renounces its active role supporting our allies; while on the other hand we try to mollify the Arab street by words and deeds. For example the Apology Tour, and withdrawal from Iraq and Afghanistan.

The bottom line
How do we all feel about the way the President represents us, and deals with our enemies? I’m in Rudy’s camp, before his apologies. Is the President a Lindbergh-style isolationist, a Manchurian Candidate, or just an incurable innocent in over his head?

Along with all the news about the financial crisis in Greece there was a constant stream of snarking, especially from Paul Krugman, about how ‘austerity’ ruined the European economy. The same commentators applaud the European Central Bank plans for quantitative easing (QE).

First, what austerity? When I look at the numbers I do not see a lot of austerity, and where austerity did occur, the economy improved. Look at the top four eurozone economies, and add Greece to the list to satisfy current interest. Here’s what I see:

In France, ditto. Government spending is up, no austerity.

In Italy government spending is down, but their GDP is rising. No pain from austerity.

Same thing in Spain. Government spending is down, rising GDP.

In Greece, government spending dropped 2010 through early 2014, but then spiked upwards. Greek GDP bottomed in 2011 and has been climbing since then.

Why are reporters and columnists telling us that European governments implemented austerity, and that this hurt their economies? Are they not looking at the data?

Summarizing: whatever ‘austerity’ occurred was isolated and brief, and where austerity might have happened, economies grew.

Fiscal and monetary tools are inadequate
Yes, there is a problem with the EU economy. Angela Merkel said recently that Europe is 8% of world population, 25% of the world economy, but 50% of welfare spending. The following chart uses World Bank data to contrast GDP growth rates for the US and the EU. 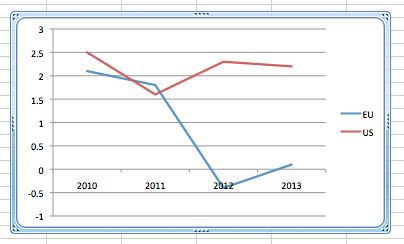 The EU tried a fiscal tool – austerity. That didn’t work. Now they’re trying a monetary tool – quantitative easing. That won’t work either. QE was not a big success in the US. Three of the world’s big emerging economies, Brazil, Russia, and China also tried QE. Starting in 2008 they started a stimulus program, bigger than what Obama tried in the US. It failed. See the following chart, using World Bank data. 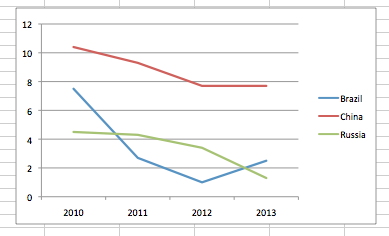 Symptoms of a non-competitive economy
The problem is that Europe’s economy is not competitive. There are some very visible symptoms: 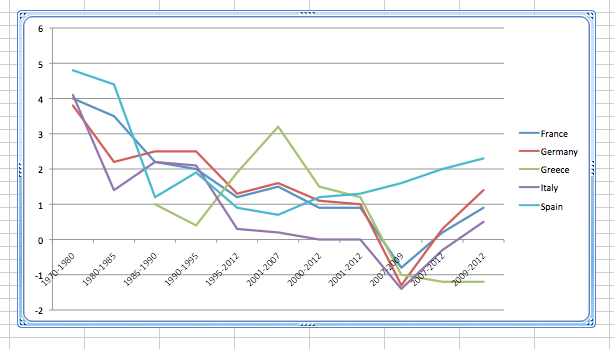 The anecdotal evidence
A quick survey of news on the economic malaise in Europe turns up a lot of stories about the ways in which businesses find Europe a tough place to operate. The all-time classic is the story of the CEO of an American tire company, Titan International, responding to a French government plea to take over a Goodyear plant scheduled for closing:

How stupid do you think we are?…The French work force gets paid high wages but works only three hours. They have one hour for their breaks and lunch, talk for three and work for three. I told this to the French unions to their faces and they told me, ‘That’s the French way!’

Italy has five separate national police forces, with twice as many police per capita as Germany.

France has many companies with 49 employees, because when a business grows to 50 employees it requires creating three worker’s councils, a profit-sharing scheme, and consulting with other workers before anyone is fired.

Austrians are legally entitled to 38 days of annual leave.

In Estonia mothers get 18 months of maternity leave, with full pay from their employer.

An article in the Economist listed problems for eurozone entrepreneurs:

The bottom line
Europe is not suffering from austerity. Indeed, where austerity was tried the economy grew. Monetary stimulus (QE) won’t help.
Europe needs to focus on returning to the kind of competitiveness that brought prosperity in the post-WW2 years.