I was raised as a Presbyterian and the relationship continues today as a long-standing family connection. My father was a Scottish immigrant. The Presbyterian church is called The Church of Scotland, Dad was a Presbyterian, and I suspect my relatives on Dad’s side of the family keep their connection to the church. If I’m forced to choose, that’s who I am. I’m not Mormon, Catholic, Jewish, or Methodist. I’m Presbyterian.

While I’m Presbyterian, I also have a long-standing affection for Israel. I remember the scenes from an old black & white Hollywood film, probably Exodus, where besieged and desperate Jewish leaders listen to the radio as news comes in of a UN vote giving legitimacy to the Jewish state. I remember the beginning of the Seven-Day war, when classmates at my high school in Munich stood in line at the Israeli consulate to enlist in the IDF. I remember the image of little Israel, attacked simultaneously and repeatedly by larger neighbors, punching above her weight and surviving every time. I know that today, Israel is the oldest democratic state in the Middle East, and a faithful friend to the US.

PC(USA), the villain in this story, is the largest Presbyterian church in the US, with about 1.76 million members. The second largest Presbyterian church in the US is the Presbyterian Church in America (PCA). Wikipedia puts PCA membership at about 367,000. Briefly, as described in the article ‘13 Differences Between the PCA and the PCUSA‘, the larger PC(USA) “routinely takes stands on a host of political issues ranging from immigration to increased funding for public schools to condemning big tobacco to divestment from Israel”, while the smaller PCA “generally hesitate to take stands on issues that do not clearly fall under the oversight of the church”.

On June 20, 2014, the PC(USA) General Assembly, according to an announcement, “narrowly approved divestment from three United States companies doing business in Israel-Palestine”.

One-sided as it may be, this is only the tip of the iceberg. The PC(USA) General Assembly also voted 482 to 88 to instruct the church’s Advisory Committee on Social Witness Policy to prepare a report providing “the most up-to-date information regarding all aspects of the Israeli occupation of Palestine”. The language of the document approved by the PC(USA) General Assembly shows clear evidence of anti-Israel bias. The committee is asked to provide

(a) the present status and pace of illegal settlement building;

(b) the appropriation of Palestinian land and natural resources;

(c) the restriction of movement on Palestinian citizens in Palestine;

(d) the extent to which human rights are denied to the Palestinian people.

The committee is also instructed that

This study guide should honestly point out that…For every two-year period occurring between General Assembly meetings, Palestinians are suffering an increasing loss of their human rights, freedom, livelihoods, property, and even their lives.

Obviously, the assumption is that these bad outcomes for the Palestinians are Israel’s fault, and the Palestinian Authority, Hamas, and Hezbollah are blameless.

It goes on in this way for the rest of the document, over five thousand words. This is all very disappointing, but consistent with left-wing thinking common in the West. Clearly, PC(USA) leadership is dominated by left-wing elites. It’s not clear whether the leadership’s thinking is shared by the membership, but PC(USA) membership is shrinking while their evangelical, non-political competitor, PCA, is growing.

I’m left to wonder what is the source for anti-Israel bias? Is it self-contempt and embarrassment at the relative success of Western society? Is it a knee-jerk sympathy with the downtrodden, no matter how hostile, contemptible, and violent they are? Or is it our old friend, simple anti-Semitism?

How odd of God to choose the Jew,

But not so odd as those who choose

The Jewish God and hate the Jew.

We hear the chant, on the streets in Brazil for the World Cup, and echoing through Olympic venues across the world. Do you ever feel uncomfortable about the jingoism and entitlement? Me too, but…

Americans are raised to think we’re different. Those differences are often described as ‘American exceptionalism’.

The term American exceptionalism refers to belief in the uniqueness and superiority of American society. Granted, we’re different, but superior?

Where did it come from?

The idea that America is an exceptional society can be traced back to Alexis de Tocqueville, and was expressed by both Jefferson and Lincoln.

Four score and seven years ago our fathers brought forth on this continent, a new nation, conceived in Liberty, and dedicated to the proposition that all men are created equal. Now we are engaged in a great civil war, testing whether that nation, or any nation so conceived and so dedicated, can long endure.  Abraham Lincoln

The term itself – ‘American exceptionalism’ – seems to originate with Joseph Stalin. An image linked to the term goes back to a warning John Winthrop delivered to future Massachusetts Bay colonists.

The city on a hill

The image of a city on a hill was used in speeches by John Kennedy and Ronald Reagan, and through their usage became linked to the idea of American exceptionalism. The image itself comes from the Bible. The American context comes from a sermon delivered by John Winthrop.

For we must consider that we shall be as a city upon a hill. The eyes of all people are upon us. So that if we shall deal falsely with our God in this work we have undertaken, and so cause Him to withdraw His present help from us, we shall be made a story and a by-word through the world.

Winthrop is warning the future colonists that expectations are high; they have an audience, and must maintain their covenant with God. Kennedy and Reagan used the image of the city on a hill to represent an idealized America. This was not Winthrop’s meaning.

Why is it controversial?

Sensitive observers among us, most of those on the left, note that American exceptionalism is condescending, paternalistic, and ethnocentric. It leads to misguided unilateral behavior on the world scene, and crass behavior at the personal level. True enough.

What is unique about the US?

In what ways are we different? Here’s an incomplete list:

1. We have revolutionary roots: We are the first colony other than Iceland to achieve independence. Also, the US is in the running as the oldest constitutional democracy, depending on how you define your terms.

America is the only nation in the world that is founded on a creed. That creed is set forth with dogmatic and even theological lucidity in the Declaration of Independence.  GK Chesterton

Two key points: first, the success of the venture: Plymouth Rock to the Moon! Second, the virtue of the founding fathers, best symbolized by Washington voluntarily giving up power at the end of the revolution.

His surrendering of his sword to the Congress in 1783 and his retirement to Mount Vernon with a promise to engage in no further political activities electrified the world … From Caesar to Marlborough, every victorious general in history had expected political rewards commensurate with his military achievements. But not Washington.

To compare, note the end of any other armed revolution. Is there one where the founders hand over power with so much trust and grace?

2. Distrust of government: the US was founded in revolt against authority. The first constitution, the Articles of Confederation, failed because the central authority it designed was too weak. So…did the second try specify a stronger central state? Yes, but the new constitution explicitly limited the power of the national government, split power among three competing branches, and then provided a Bill of Rights.

3. The frontier experience: Other countries have a frontier experience in their history, notably South Africa and Russia. The US experience is unique in two ways.  First, land ownership was given to settlers at little or no cost. Second, settlers set up their own democratic governments, and the territories later applied for admission as new states in the union. The trials and final success of the frontier experience were a learning experience that strengthened unique American tendencies toward individualism, practicality, and optimism.

This country has led the world by far in the proportion of people completing different levels of mass education from early in the nineteenth century, first for elementary and high schools, later for colleges and graduate institutions. While America has long predominated in the ratio of those of college and university age attending or completing tertiary education, the numbers and proportions involved have been massive since World War II…America spends a greater proportion of its gross domestic product (GDP) on education, 7.0 percent, than does the European Union, 5.3 percent, or Japan, 5.0 percent.  Theodore Lipset

5. Individual generosity: Here’s a summary of the World Giving Index 2013:

The index found that the United States was the most generous country on earth, followed in joint second place by Canada, Burma and New Zealand, with Ireland in fifth place.

There’s also a famous editorial from our neighbors to the north, written at a time when we were in some difficulty:

When the railways of France, Germany and India were breaking down through age, it was the Americans who rebuilt them. When the Pennsylvania Railroad and the New York Central went broke, nobody loaned them an old caboose. Both are still broke. I can name to you 5,000 times when the Americans raced to the help of other people in trouble. Can you name me even one time when someone else raced to the Americans in trouble?

I don’t think there was outside help even during the San Francisco earthquake. Our neighbours have faced it alone and I am one Canadian who is damned tired of hearing them kicked around. They will come out of this thing with their flag high. And when they do, they are entitled to thumb their nose at the lands that are gloating over their present troubles. I hope Canada is not one of these. But there are many smug, self-righteous Canadians.

And finally, the American Red Cross was told at its 48th Annual meeting in New Orleans this morning that it was broke. This year’s disasters … with the year less than half-over… has taken it all and nobody…but nobody… has helped.

Our neighbor Peggy invented a better mousetrap. Or at least a friend of hers did, or maybe a friend of a friend. Regardless, provisional credit goes to Peggy, author, pediatrician, world traveler, and neighbor, who passed along to me the secret of the Bucket of Doom. 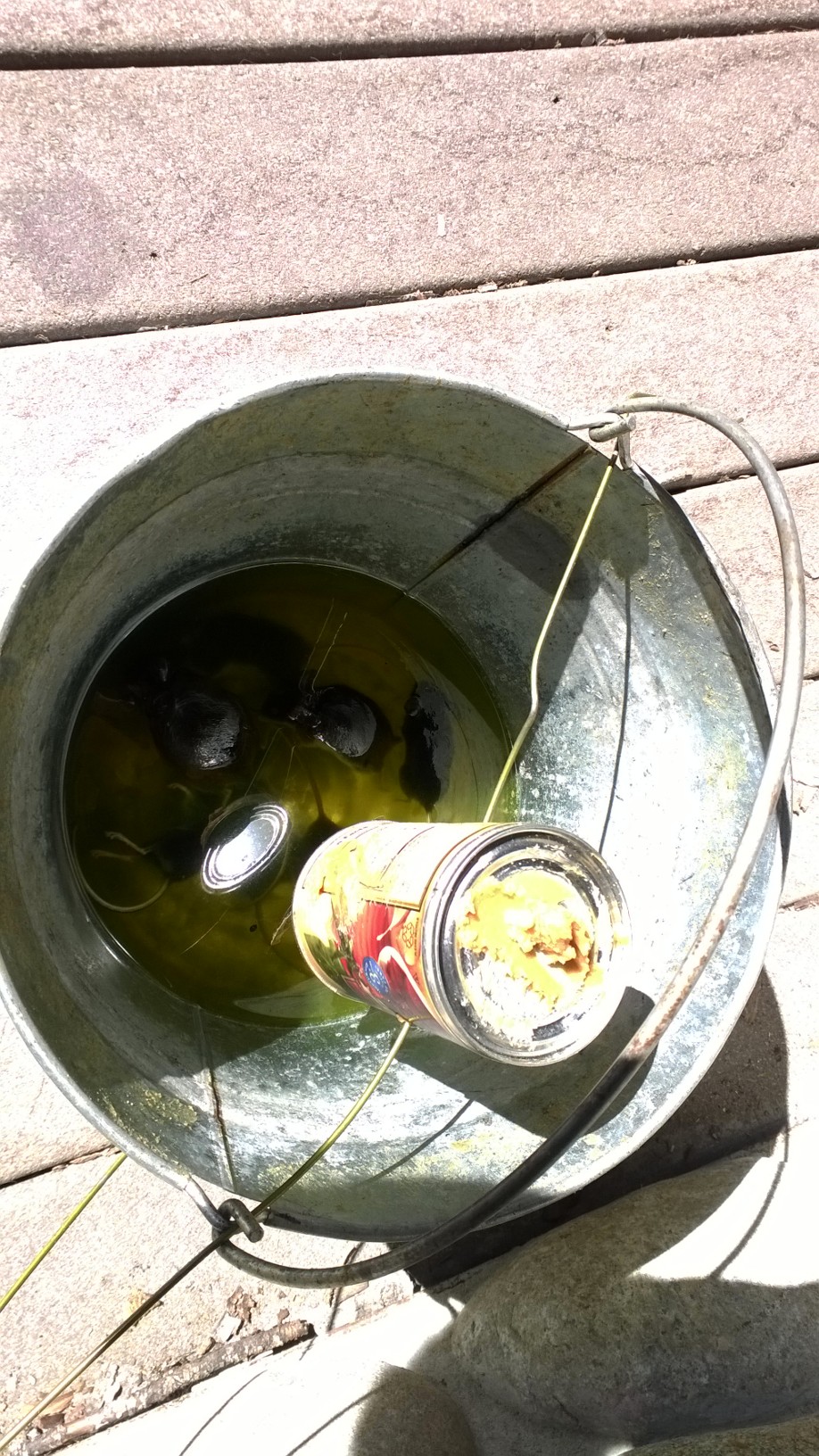 The Bucket of Doom is not a mousetrap you want to use in your kitchen or underneath your bed. It seems almost designed for crawlspaces, where it can sit, killing mice by the tens, not needing help or attention for weeks at a stretch.

You need the following:

The piece of wood is a ramp, allowing the mice to reach the rim of the bucket and start salivating over the delish peanut butter you slathered on the can, just out of reach along that wire…splash. Ooops.

I’ve found as many as eight mice at a time in my bucket. Rumor has it that Peggy has found dozens at a time. I use a couple pieces of wood to lift out the little corpses, then drop them on a newspaper and wrap them up. Since they’re alcohol-saturated they burn well.