Before the coronavirus it was a time of relative prosperity in our country. Two of the leading Democrat candidates for President chose to debunk the good times by claiming that the American Dream was either slipping away or already dead.

Look at what the two candidates, Elizabeth Warren and Bernie Sanders, said.

Senator Warren
According to a story published on the web site Politico.com, Warren “slammed Republicans on education, job creation and other economic policies, warning Wednesday that ‘the American Dream is slipping out of reach…We must fight back with everything we have,’ Warren told a gathering hosted by the Center for American Progress in Washington. ‘The game is rigged but we know how to fix it. We know what to do. We tested the Republican ideas and they failed. They failed spectacularly there’s no denying that fact.'”

Senator Sanders
As recently as March 15, 2020 Sanders’ official site hosted on Senate.gov hosted a video recording titled ‘What Happened to the American Dream?’. In the recording Senator Sanders was speaking on the floor of the Senate. He focused on inequality and the evils of oligarchy: “This great country is evolving into an oligarchic society…We have the most unequal distribution of wealth and income of any major country on earth…The top 1% in our nation owns 38% of the financial wealth of America…More and more income goes to the millionaires and billionaires.” 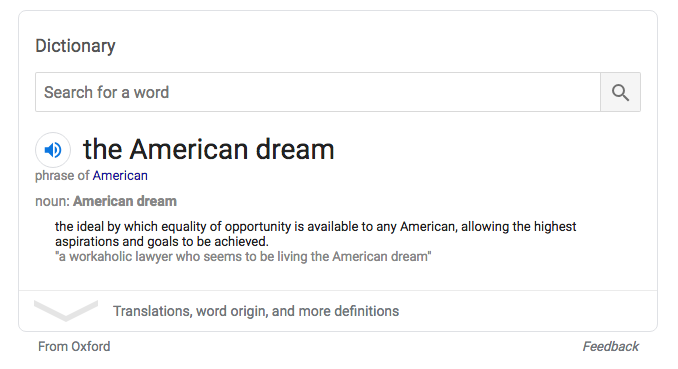 I don’t know how the type of deception practiced by Warren and Sanders is defined in guides to tactics for argumentation and persuasion. Straw man? Bait and switch? Whatever it’s called, it’s fairly common. Take a favorite attribute like justice, equality, or fairness; then attach your own convenient definition to that term and accuse opponents of supporting unfairness, inequality, or injustice.

The Facts
People vote with their feet. The reality is everyone wants to come here, and once they’ve arrived no one wants to leave. The American Dream is right here, alive and well. Look at the numbers.

First, the US is still among the world’s most-popular destinations for immigrants. See the chart below, using UN data.

Second, and more important, the US ranks at or near the bottom in rate of emigration. Looking at the rest of the world from a perch inside the US, America looks pretty good. See the chart below, copied from an OECD source. Note that the data is sliced four different ways, and the US always ends up with the lowest emigration rate or very near it. 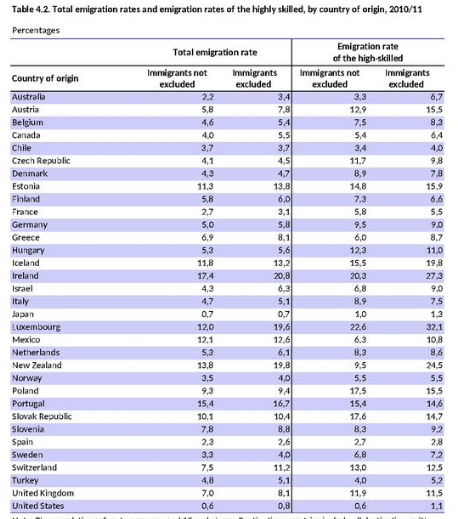 Is it the relative prosperity? Probably not; my guess is that other countries rank higher in prosperity. It’s because we offer the best shot at achieving your dream, regardless of whether you’re Asian, African, European or from the South Pacific. (The gentleman who installed a new heating system at our home last month had a British accent, and was from Fiji.) Everybody gets their shot. That’s the American Dream.

The Bottom Line
Unequal results don’t implicate the system. Where and when was it ever promised that America would deliver equality in wealth? The promise is equal opportunity, not equal results.

People looking for something better believe in the American Dream. I don’t know of any good metrics for opportunity, so I can’t prove them right or wrong; but they vote with their feet. They come, and they stay.