How did Donald Trump do in managing the economy? He ran for office as an outsider, boasting of his practical knowledge of what business needed. Between his inauguration and the beginning of the Covid pandemic in March, how well did he do? First, the big four metrics: GDP growth, unemployment, inflation, and the stock market.

GDP growth There were promises of great results from the tax cuts, and boasts later on about how wonderful the economy was. The actual results seem good, but don’t quite match the boasts. See the following graphic courtesy of the St Louis Fed. GDP growth continued, but was not dramatic. My uninformed guess is that business investment was not as great as expected, thus the tax cut didn’t help as much as hoped. My grade is a B minus.

Unemployment The current definition of full employment seems to be in the 4% range. Since 2016 the unemployment rate fell steadily, ending below 4% in early 2020. See the graphic below, courtesy of tradingeconomics.com, using BLS data. My grade is an A.

Inflation The Fed had this totally under control. The Fed Chairman and President seemed to disagree at times, but inflation remained in check. See the graphic courtesy of the St Louis Fed, showing CPI. What can you say? My grade is an A. I admit it was unearned, but it’s an A.

“Wall Street understands a President Joe Biden would not be good for capital. He would increase taxes on corporations and the wealthy by $4 trillion over the next decade. In June, Wall Street analysts warned clients a Biden win would be bearish for stocks.” 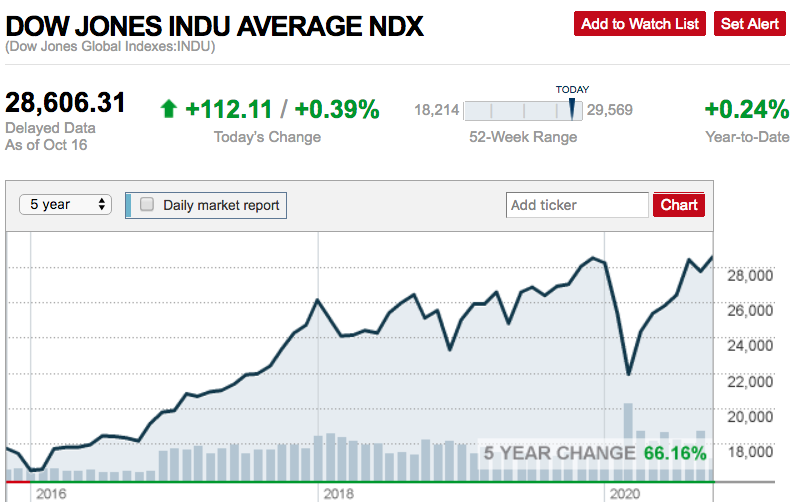 Above is a chart showing the Dow Jones index, courtesy of cnn.com. See the steady gains from early 2016 through early 2020. But…compared to what? Comparing Trump versus Obama is indeterminate. See the following quote from the Cleveland Plain Dealer.

“The Dow Jones Industrial Average increased 49% during Donald Trump’s first three years in office, topping the gains made during Barack Obama’s entire final term but falling short to-date of how much the Dow went up during Obama’s first term.”

I don’t quarrel with a market that delivers steady gains and expresses a clear preference for Trump to stay in office. If you prefer an up market versus a down market, you have to give him at least a B plus.

Moving on to look at some other more-focused metrics, a Wall Street Journal editorial on 9/17/20 titled “The Higher Wages of Growth” made several assertions about the Trump economy. But it was an editorial. Exercising some skepticism I checked to see if the assertions could be verified, as follows:

2. Median household incomes grew more among Hispanics, Blacks and Asians than among Whites. True. See table A-2 on the US Census Bureau site cited in #1 above. For the years 2017 – 2019:

6. Income inequality declined. True, if you accept comparison of changes in top and bottom quintiles as a measure. See table A-4 on the US Census Bureau site cited in #1 above. For the years 2017 – 2019, under the heading “Shares of Household Income of Quintiles” the two top quintiles both DECLINED and the three bottom quintiles all INCREASED. The largest INCREASE was in the 2nd quintile from the bottom (8.1 to 8.3). The largest DECREASE was in the top quintile (52.3 to 51.9).

7. New business applications are higher under Trump. See the following chart, from the census.gov web site.

It’s hard to argue with success. From 2017 – 2019 Donald Trump got good results with the economy, whether you’re looking at overall metrics like GDP and unemployment, or on class, race, and gender inequality.
What about the pandemic? Once the lockdown began, economic performance was no longer a priority. All the traditional economic measures went out the window. You might compare economic results from similar countries; but how do you compare economic results from different lockdown strategies, for example Sweden vs Italy? Uncharted territory.

I often speculate on why countries are successful or not, and lately there has been some interesting research and writing on this topic.

Niall Ferguson; Civilization: The West and the Rest “Ferguson compared and contrasted how the West’s “killer apps” allowed the West to triumph over “the Rest” citing examples.”

Jared Diamond; Guns, Germs, and Steel “The book attempts to explain why Eurasian and North African civilizations have survived and conquered others, while arguing against the idea that Eurasian hegemony is due to any form of Eurasian intellectual, moral, or inherent genetic superiority. ”

Daron Acemoglu; Why Nations Fail: The Origins of Power, Prosperity, and Poverty “The book applies insights from institutional economics, development economics and economic history to understand why nations develop differently, with some succeeding in the accumulation of power and prosperity and others failing, via a wide range of historical case studies. ”

Joel Mokyr; A Culture of Growth “argues that political fragmentation (the presence of a large number of European states) made it possible for heterodox ideas to thrive, as entrepreneurs, innovators, ideologues, and heretics could easily flee to a neighbouring state in the event that the one state would try to suppress their ideas and activities. This is what set Europe apart from the technologically advanced, large unitary empires such as China and India.”

Why Nations Succeed Columbia University hosted a seminar in 2014 to examine the question “What are the social, economic and legal building blocks for success?”

Related to the topic of WHY is the question of what successful nations look like, by defining their values and then comparing across countries. Some really interesting research and writing centers around comparative metrics of national culture. Especially see the many web sites discussing Hofstede’s Cultural Dimensions Theory.

The Enlightenment
I’m here to assert that values and culture matter, and to point at a common heritage shared by many countries that we rank as “successful”. This shared cultural heritage is the intellectual and philosophical movement called The Enlightenment.

The Enlightenment’s ideas “centered on the sovereignty of reason and the evidence of the senses as the primary sources of knowledge and advanced ideals such as liberty, progress, toleration, fraternity, constitutional government and separation of church and state.”

The Enlightenment occurred chronologically between the Renaissance and the Industrial Revolution. It was a reaction to the first, and laid the foundations for the latter.

A quick and dirty metric of ‘geographic locale’ for The Enlightenment might go as follows: the Wikipedia article lists 13 “major figures” – 4 were British, 4 were French, there were 2 Germans, and one each from Italy, Netherlands and Switzerland; which puts the heart of the Enlightenment in NW Europe.

To repeat, Enlightenment values are: rationality and empiricism, separation of church and state, liberty, progress, toleration, fraternity, and constitutional government.

Now I suggest something you might think is mean-spirited, but it’s important and valuable – look at my list of shithole countries, which is Afghanistan, plus seven countries in Sub-Saharan Africa. Can you associate any of these countries with any one of the 8 Enlightenment values I just listed? Further, if I were to create a list which is the opposite of the shithole list (this would be countries that appear in the top 20 for both GDP per capita and ease of doing business), I bet most of the countries on that list will be rich in Enlightenment values.

The Enlightenment is a core cultural heritage shared by most nations in NW Europe. The degree to which those countries ‘drank the koolaid’ probably played a big role in their success. Germany, France and the UK were at the center, and they’ve done well. It’s also clear that The Enlightenment is a key piece of cultural heritage for Canada, Australia and the US as well; and we’re all doing OK too.

So what explains the relative success of the Asian Tigers? Good question. I don’t know.

One of my earlier posts is titled ‘Culture Matters‘, so this one gets the #2 modifier.

The Bottom Line
Culture matters. The Enlightenment seems forgotten, but it is an important part of our heritage and it is key to our success.