We forget what the past was like. No matter that we actually lived the past, the realities of how people felt and believed are lost, and we move on. We focus on today; but there are clues we can unearth to show us how much has changed, and how far the changes have gone.

Shocking, isn’t it? You may laugh, but the evidence is that those were common sentiments at the time. Today these lyrics are likely greeted with hoots and howls, but in the 50s and 60s they were mainstream. So, page forward to today: we here in Seattle recently experienced what was described as a “ghastly downtown event”, summarized here:

“three men, apparently street gang members, got embroiled in a rush-hour gunfight at the crowded intersection of Pine Street and Third Avenue. A 50-year-old female, described by the Seattle Times as a “joyful woman who lived a rich life,” was killed, and seven others were wounded, including one of the shooters. After the melee, police found some 20 shell casings at the scene.”

Modern popular culture forms the context. Recently I did an Internet search using the string “most popular rap songs 2019 list” and came up with a list, and at the top of the list was “I Said Me” by the artist 2 Chainz. A selection from the lyrics follows:

You think this is an outlier? Remember, my search engine passed it back to me as top of the list in popularity. One critical review called it “his most cogent and organized album by far, and his most thoughtful one.” Another reviewer wrote:

“We need more for the next tape. This album feels like a new beginning for 2 Chainz; he talks about his veteran age, how his actual drug dealing is all in the past, how he’s a washed up ball player… it feels like that’s all he’s got going for him now. The foundation is there, but we need more for things to be as interesting as they could be.”

I’m not making it up.

The 50s hit “Crying in the Chapel” speaks from a Christian point of view, but I don’t endorse Christianity in particular. My experience is that the other major religious faiths equally reject the self-absorbed and violent views of the artist 2 Chainz.

The Bottom Line
I believe we’re experiencing a loss of consensus about what is right and wrong, and a loss of community standards enforcing sensible values.

This article presents the 2020 version of the Shithole Country Index, memorializing Donald Trump’s famous remark from January 11, 2018: “Why do we want all these people from ‘shithole countries’ coming here?”

The Shithole Countries list combines two indexes compiled by the World Bank: GDP per capita, and ease of doing business. One list indicates economic success, the other indicates level of effort. To be classed as a shithole country you must appear in the bottom twenty on BOTH lists. In other words you are at the very same time both a world class failure, and not trying to do anything about it. 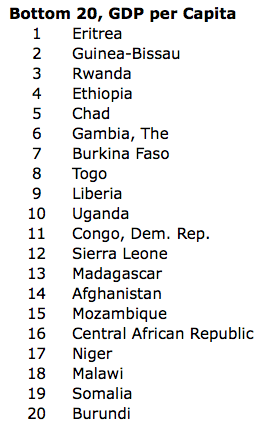 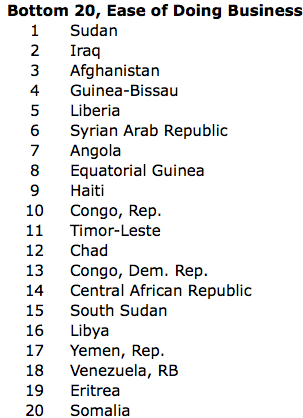 The third annual Shithole Country List follows. The rank numbers are compiled simply by adding the ranks in the GDP and ease of business indexes. For example Somalia is 20 + 19 = 39. A high number indicates you’re at the bottom of the list, which is not preferred. Italic text indicates countries that appear in each of the three annual Shithole Countries list.

Congratulations to Haiti for exiting the list; sympathy to Eritrea and Afghanistan for joining as new members.

What is it that makes some counties successful and others not? I’ve been thinking lately about The Enlightenment, the European philosophical movement that was the root of many of the ideas of the American Revolution. Countries that hosted the Enlightenment or adopted its ideas are successful. But then, what about Asian countries? Maybe the key factor is respect for property rights? Why is Singapore successful, and not Laos? Why Canada, and not Brazil?

The Bottom Line
Appearance in the Shithole Country List indicates epic cultural/civilizational failure. Note that the only non-African country to appear on the list this year is Afghanistan.