In my memory it’s always conservatives that were considered narrow-minded: forever resistant to logical argument and humane sentiment on topics from voter rights to the minimum wage. But today I see that now it’s liberals actively quashing dissenting voices — trying over and over to erase any evidence of different opinions.

The Bing search engine’s definition of liberalism is this: “one of the basic tenets of liberalism is tolerance”. However, liberals today often seem unwilling to tolerate any expression of views they don’t agree with. The Pew Research Center published poll results in 2014 showing that liberals are more likely to block political views which which they disagree:

More than four-in-ten consistent liberals who use Facebook (44%) say they have blocked someone on a social networking site because of a political post. Consistent conservatives are less likely to have done this (31%), as are those with more mixed ideological views (about two-in-ten).

This graphic is copied from the article: 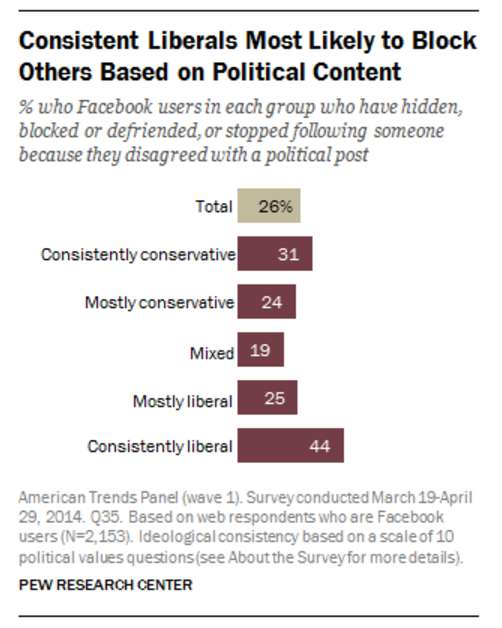 Sen. Warren then had Litan fired, arguing that his testimony was paid for by the financial industry. Warren’s action drew a lot of comment, including a letter to the Washington Post from five Democrat economists protesting Warren’s act:

he has been completely transparent about the support for, and conduct of, the study in question, as both Brookings and Senator Warren were well aware from the day he first testified before the Congress on the matter…To attack him as being ‘bought,’ or to sever ties with him over an incidental bureaucratic issue, is below the standards that support free and open policy debate

Tenured Professor Fired for Blogging
John McAdams is a Harvard PhD and tenured professor at Marquette University. In November, 2014 he posted a blog post describing an argument between a TA and student in a class at Marquette titled ‘Theory of Ethics’. The argument was recorded, including this statement by the TA:

You can have whatever opinions you want but I can tell you right now, in this class homophobic comments, racist comments, and sexist comments will not be tolerated. If you don’t like that you are more than free to drop this class.

Prof. McAdams’ blog post got lots of attention as documenting an example of intellectual intolerance and browbeating. The following month he was suspended from teaching, and banned from the campus. In January, he was notified that the university was ‘commencing the process to revoke your tenure and to dismiss you from the faculty’. The notification from the university accused the professor of choosing to ‘shame and intimidate with an Internet story that was incompetent, inaccurate, and lacking in integrity, respect for other’s opinions, and appropriate restraint.’

However, according to an editorial in the Wall Street Journal, Marquette’s faculty handbook forbids dismissal for ‘academic freedoms of thought, doctrine, discourse, association, advocacy, or action.’ The Journal’s editorial began with this trenchant comment: ‘Blogging can be dangerous to your livelihood – or at least it can at Marquette University, where a professor may lose his job for expressing the wrong political views.’

RICO for Expressing the Wrong Opinions on Global Warming
Sen Sheldon Whitehouse (D-RI) suggested in a May 29, 2015 editorial in the Washington Post, that Federal prosecutors should use RICO laws to prosecute global warming skeptics.

The Senator’s proposed prosecutions would target, according to a supporting paper: ‘a wide range of activities, including political lobbying, contributions to political candidates, and a large number of communication and media efforts’. Which one of the listed activities is remotely improper? Apparently they’re improper only if you’re arguing the other side.

Of course, global warming non-skeptics get lots of support via taxpayer money. The Senator’s suggestion is that if opponents join the debate using private cash, then prosecute them. As an October 9, 2015 editorial on this issue in the Wall Street Journal (appropriately titled “Shut Up—Or We’ll Shut You Down”) said: ‘The strategy of the progressive left is no longer to win public debates, but to forcibly silence their opponents’.

A Retired General is Forced Out at Northwestern
Lt Gen Karl Eikenberry, USA, Ret., and former US Ambassador to Afghanistan, is surely a great source of knowledge and wisdom on international politics. That’s probably what Stanford University had in mind when they hired him as a lecturer and faculty member in 2011. In November, 2015 Northwestern University announced Eikenberry’s appointment as executive director of the Buffett Institute. As Northwestern said in the announcement: ‘He has played a highly visible role on the world stage with his frank and insightful ideas about some of the most critical issues of our day and will play a central role in taking the scope and impact of our global programs to an entirely new level’.

However, Northwestern faculty objected to the hiring. A February 9, 2016 letter signed by 46 faculty said ‘we believe that it would be irresponsible to remain silent while the University’s core mission of independent research and teaching becomes identified with U.S. military and foreign policy.’ In other words, US military experience is a dis-qualifier.

The Faculty Senate voted to support the hire, but the controversy continued and Eikenberry withdrew from the position in April.

The Bottom Line
When liberals speak out in support of diversity they apparently don’t include diversity of thought and opinion. Diversity of race, color, and creed is good. Different opinions are not tolerated.