Cleveland Browns and NY Jets fans can relax. Your teams will never be any good. The Jets and Browns can get a top pick in the lottery, change quarterbacks, and change coaches…and they probably will; it won’t make a bit of difference – they’re cursed. Why? Because the Jets and Browns have bad owners.
An inept owner condemns an NFL team to futility and obscurity forever; or at least until the team is sold to a different owner. Four examples from NFL history make the point:

A good or bad owner makes all the difference, but why? They don’t ever get out on the field, they don’t ever call a play, and they usually don’t get too involved in player selection. On the other hand the owner is the most enduring presence in team management, and the most powerful. Owners are responsible for picking coaches and general managers, providing a stadium, and financing the team’s operations. If the owner makes bad choices; or is unable to provide enough money to operate the team, the team is crippled. And you can’t fire an owner. Owners don’t come and go like coaches, they’re forever.

Owners ranked
So – who’s good and who’s bad? In 2013, Sports Illustrated said that the five best owners were these:

and the five worst were these:

Not surprised? Notice how this list of good and bad from 2013 is still truth in today’s NFL.

The Houston Chronicle and Yahoo Sports both published full ranked lists of NFL owners, 1 through 32. When you put those two lists side-by-side and split the differences, you get this list: 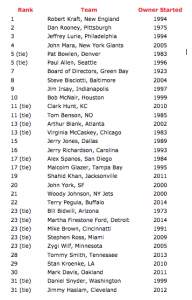 Yes, it’s possible the writers here are just replaying the teams’ record on the field. Lots of wins = a good owner. But wins and losses are too superficial. I built my own list of NFL owner rankings, and wanted to base my list on more than just wins/losses. Owners are responsible for hiring head coaches and providing a stadium, and the outcomes of both jobs are easily used as metrics for ranking owners.

The long tenure of New England Patriots’ coach Bill Belichick, he was hired in 2000, puts the Patriots at the top of the list. At the bottom are seven teams that dumped their coaches and had to hire new ones for the 2016 season. I take long tenure as a good thing.

Putting it all together
To come up with my own ranking of NFL owners I combined three factors:

Here’s my ranking of NFL owners, good to bad: 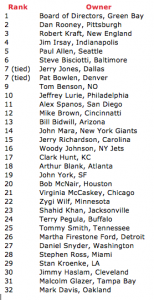 I actually like the ‘experts’ list better – meaning the list at the top of this article. The biggest single difference between the two lists is Tampa Bay: my list has their owner at 31, the experts rank him at 17. Yes, the future at Tampa Bay looks bright with a good-looking young coach and Jameis Winston at quarterback, so a 17 ranking looks a better bet than 31. I’d bet on Tampa Bay before I’d bet on San Francisco.

The bottom line
The critical un-acknowledged factor in NFL success is the quality of the team’s owner. If you’re a fan of a team with a knucklehead owner, you’ve got a long wait before things get better. If your owner is one of the smart ones, you’re in the tall clover for a long time.
Seattle Seahawk fans – I’d be a lot more concerned about Paul Allen’s health than Marshawn Lynch’s.