US immigration policy is a train wreck. There are now over 12 million illegal residents in the US. A bit more than half entered legally and overstayed their visas, the remainder entered illegally. We show little desire or ability to prevent increases in these numbers, or to decide how to deal with the illegals already present.

The Republicans are also part of the problem. Republicans are torn between two incompatible impulses: one is to support the Tea Party-leaning part of their base that favors deportations; the other impulse is to avoid antagonizing Hispanics. In the House of Representatives the result is legislation that does nothing more than reverse Obama policies. See for example the votes earlier this month.

As I said – a train wreck. Our immigration policy is a display of government incompetence that ranks right up there with our failure to deal with nuclear waste. (If you’re in the Pacific Northwest, think Hanford and the Department of Energy. Elsewhere in the US, think Yucca Mountain and Senator Harry Reid.) Together, nuclear waste and immigration policy are what you bring up whenever someone suggests giving more responsibility to the government.

Do we agree on this much?
I offer these principles that all Americans should agree to:

A couple personal notes
I know my friends on the left don’t like the word ‘illegal’. Sorry, that’s silly and trivial. Clarity and truth are more important in this matter.
There are more than 12 million people now in the US who are ignoring one of our laws. Many on the left seem to think this is cute or heroic, as if illegals were a kind of Robin Hood. If illegals can ignore a law, I want to do that too. Which law can I ignore? Do I get to pick one?

There are three issues the US needs to resolve: whom do we allow to enter as legal immigrants, how do we prevent people entering illegally, and what happens to the illegals already within our borders?

Dealing with illegal immigrants
Of these three issues, illegal immigrants should be the least important; unfortunately, the illegals get most of the focus. The left sees potential new voters, business interests see willing workers, the right focuses on red flags of illegal status and amnesty. We can give up on the idea of deporting twelve million illegals, it will not happen.

Let’s give illegals work permits and sign them up for income taxes. If they want citizenship and voting rights they can get in line behind all the others that applied for visas at US consulates in Monterey and Hong Kong. I don’t see how you can give illegals citizenship ahead of those who are willing to play fair, follow our rules and wait for permission to enter.

As far as trading citizenship for promises of better enforcement: fool me once, fool me twice…We tried that. Amnesty encourages future illegal behavior.

Preventing illegal entry
How do we prevent illegal entry? Assuming we want to control the borders, it’s a technical and diplomatic problem. On the technical side I suggest there’s no need to re-invent the wheel. Most of our allies are dealing with the same issue. Let’s share experiences and make sure we do things in a smart way. Maybe this is happening, but you never hear about it.

On the diplomatic side, what’s going on with our neighbor: Estados Unidos Mexicanos? Do we have shared interests here? If the US wants to stop the flow of illegals from Mexico, don’t we need Mexico’s help? How to persuade them to close down their borders? Let’s get Mexican support. We’re in a position to make Mexico an offer they can’t refuse, should we choose to. By the way, I’m totally in favor of drug legalization, especially if that helps our neighbor deal with law enforcement on their side of the border.

Moving forward
What do we want out of immigration policy? Start with the idea that the first responsibility of any nation is sovereignty. We’re responsible for our own borders, we get to decide who can enter, how many can enter, and who gets citizenship.

What kinds of immigrants do we want? Today, two of every three legal immigrants enter based on family preferences, rather than desire to work or valuable skills. Do we want immigrants that buy homes, start businesses, and stay off welfare? We can do that. See the following tables from the Center for Immigration Studies. The tables summarize self-employment, welfare, and home ownership data for US immigrants. 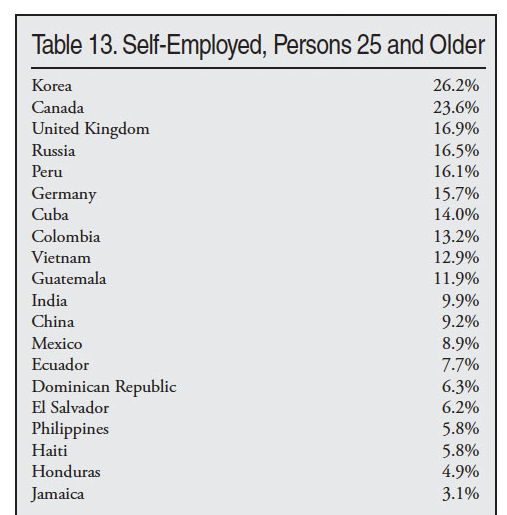 Self employment among immigrants 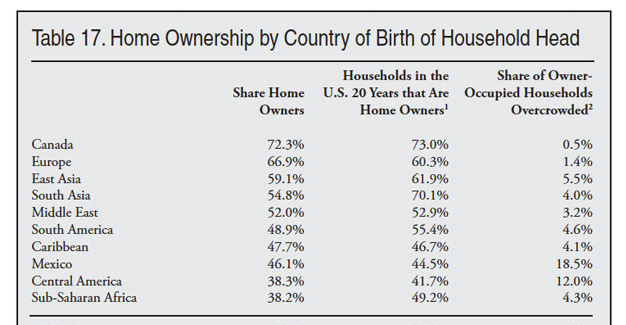 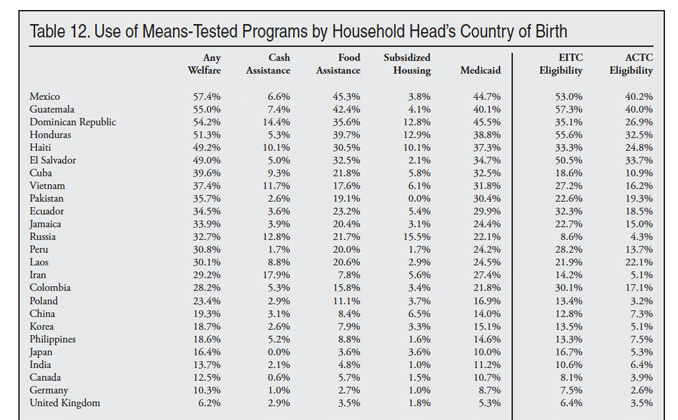 If you support economic self-reliance the above data suggests that Koreans, Canadians and UK citizens are a good bet; Mexicans, Africans, and Guatemalans less so. Call it racism, I call it math. You pick your own metrics, the data is available. We should use available data to shape our policies so that we get desirable immigrants. It’s our right to pick and choose who we let in.

It’s late 1938 and an Austrian physicist is on a walk with her nephew in the Swedish countryside. The physicist’s name is Lise Meitner. She’s a Jewish refugee who fled from Berlin that summer with ten marks in her purse. Meitner is corresponding with a team of chemists in Germany. The chemists bombarded uranium nuclei with neutrons, and the final product, inexplicably, is contaminated with barium. Where is the barium coming from?

Meitner suddenly realizes what has happened, and draws a picture for her nephew of the uranium nuclei breaking into two equal-sized pieces, resulting in barium. Lise Meitner goes on to write an article, published in the magazine Nature in January, 1939. In the paper she coins the term ‘fission’, and provides two different calculations of the energy release from the new process. The number is colossally large, and it is immediately understood that there are serious military implications.

Concerned scientists get in touch with another Jewish refugee, this one in the US – Albert Einstein, and Einstein writes to President Roosevelt. As the direct result of Einstein’s letter the Manhattan Project is established, and the US successfully carries out one nuclear test, followed by two explosions in Japan. WW2 ends, fascism is defeated, freedom lives to breathe another day.

That’s one example of the contributions Jews have made to the world. The Jewish record of achievement can’t be ignored. As David Brooks wrote in his New York Times column:

What explains this genius and unique productivity? Their simultaneous faith in progress and personal accountability creates a tension that keeps them looking forward, while allowing little rest. Jews are driven but optimistic all at once.

Consider the top five most influential people in world history, is this a good list? Moses, Jesus, Marx, Freud, & Einstein: they’re all Jewish.

I bring this up now because of last week’s events in Paris. (I planned a post about the origins of Islam, but my family asked me to be discreet. So, rather than taking a shot at Islamic pretensions, I’m giving a boost to the Jews.)

A satiric magazine was attacked, but also a Jewish grocery. The cartoonists did something specific to cause anger. The Jews were just Jews, and this seems to be happening more often in Europe these days. The trend is summarized in these two articles, one from Associated Press and the other from the New York Times:

Europe’s Anti-Semitism Comes Out of the Shadows

Bottom line
I don’t understand what the world has against Jews. At the very least they deserve the same support and respect as anyone else. This Presbyterian says that given their record of creativity and innovation, the world can use a lot more Jews.