On January 11 Donald Trump famously said: “Why do we want all these people from ‘shithole countries’ coming here?” and the outrage was unanimous and quick. Most prominent was Sen. Cory Booker (D, NJ) who was variously quoted as follows:

So I’m wondering, where’s the ignorance? Where’s the bigotry? Is it not self-evident that some countries are ‘less worthy’? I’ve personally visited more than one country that quite clearly matches Trump’s description. According to CNN, Trump was referring specifically to Haiti. I’ve never been to Haiti, but news reports make it sound worse than the shithole countries I’ve personally visited.

For the sake of discussion, compare Haiti and Singapore. Both are former colonies: Haiti was a French colony up until 1804, Singapore was a British colony until 1956. Their paths since then are different, and instructive.

Singapore
Singapore was largely destroyed during the Japanese occupation in World War 2. Conditions immediately after the war are described in a Wikipedia article: “violence and disorder; looting and revenge-killing… shortage of food leading to malnutrition, disease, and rampant crime and violence. High food prices, unemployment…massive stoppages in public transport and other services.”

Haiti
Haiti began its history as a prosperous French colony. According to an article in The Guardian, a left-leaning British newspaper: “In the 18th century, under French rule, Haiti – then called Saint-Domingue – was the Pearl of the Antilles, one of the richest islands in France’s empire”. Haiti gained independence from France in 1804, and today is ranked near the bottom on any meaningful metric of prosperity or development. If you read up on Haiti on the internet, you find titles like “Haiti: a long descent to hell” and “Why is Haiti such a poor country?”

In 200 years Haiti goes from ‘hero to zero’. Singapore goes from ‘zero to hero’ in sixty years.

Why the difference?
Here’s a clue – see the World Bank’s index for ‘ease of doing business’. Singapore ranks 2nd. Haiti ranks 181 out of 190. (To gauge how seriously this index is taken, see in this article an analysis of why and how India moved up three spots in the 2017 ranking of 190 countries.)

What’s the secret to Singapore’s success? An article on the NPR website pointed to “very, very free trade, very low tariffs [and] very few non-tariff barriers…They’ll boast about how you can start your own company in Singapore in three hours.”

HuffPost, formerly The Huffington Post and typically left-of-center, pointed to a formula that seems right out of a Protestant self-help guide: “Singapore’s success is due to MPH: Meritocracy, Pragmatism and Honesty”.

Why is Haiti floundering? The ease of doing business index tells me one thing: whoever is in charge doesn’t want prosperity for Haiti. Haiti seems unwilling and incapable of helping itself.

I propose we create a “Shithole Country Index”, to include countries listed in the bottom twenty on both of two World Bank lists: GDP per Capita and Ease of Doing Business. One list indicates success or lack of it, the other indicates level of effort. 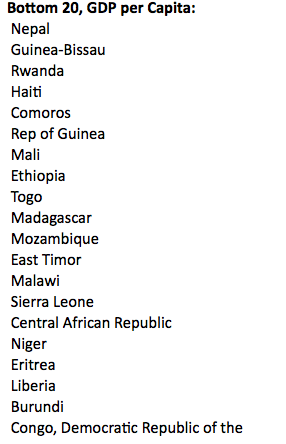 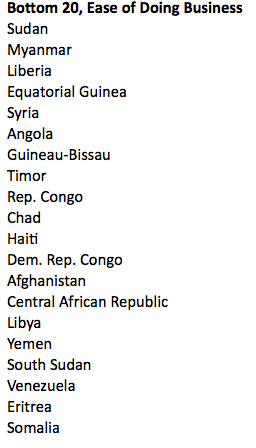 If you’re a country that is simultaneously a complete failure and also not even trying, then you’re legitimately a shithole country. The winners are…our first members of the Shithole Country Index:

The Bottom Line
Donald Trump should not have used the words he used. Regardless, the fact that ‘shithole countries’ exist is self-evident.
However, how we prioritize immigrants from all countries is a matter for discussion, hopefully without accusations of racism.

It’s been the decade of leaks, famously this trio:

All of the above were involved in leaking secret military data, harming national security and risking the lives of US military and government personnel. Each of these three is celebrated by the left.

On the other hand, there is a debate this week about the possible release of a memo written by Republican legislators on the House Intelligence Committee. The memo, if released, will be released by the legally constituted authorities, after full legal review. The New York Times editorial board trumpeted as follows:

unbridled self-interest and bottomless bad faith…undermining the credibility of the law enforcement community…nothing to do with truth or accountability…misleading propaganda…cut-and-paste job…There’s so much deception and obfuscation going on here that it’s hard to know where to start…shows a profound ignorance …junior high school pranksters…The question is whether there are any adults left in the G.O.P…the consequences — and the rest of America — be damned.

Of course, the NYT editorial board hasn’t read the memo yet, it hasn’t been released. Yet they know all these things about it, and have reached their considered and temperate judgement.

Set aside the contents of a memo none of us has read. I’ll even concede for the sake of argument that maybe it shouldn’t be released. Focus just on the contrast between the three leakers on one hand; and lawful actions by elected officials, the duly constituted authorities, on the other hand.

Presumably many of the people who applauded Manning, Snowden and Assange, now oppose the release of the House memo. This is the position they find themselves taking:

The Bottom Line
Looking forward this weekend to a re-reading of Animal Farm:

“All animals are equal but some animals are more equal than others…Four legs good, two legs better!”