Have you felt that the press in America is increasingly partisan, that opinion has replaced facts, and that journalists now preach morality rather than document reality?

A recent article in the British journal The Economist documented this concern, and provided explanations. The article is titled ‘How objectivity in journalism became a matter of opinion‘ and appeared in the 7/16/2020 issue. The article is available online, but is pay-walled so you may not have easy access to it. The writer concludes that journalism now has a new goal: “Disenchanted with objectivity, some journalists have alighted on a new ideal: “moral clarity”. … The danger is that advocates of moral clarity slide self-righteously towards crude subjectivity.”

The Economist article provide 4 reasons why objectivity is now largely discarded by reporters.
1. “Donald Trump’s rise and the challenges it has posed to traditional reporting”
2. “the changing make-up of the American newsroom…has also made some wonder if the “objective” viewpoint is in fact a white, male one.”
3. “the rise of social media—has given dissenters a megaphone. … The division between news and comment, clear on paper in American journalism, dissolves on the internet. A study for the AP in 2018 found that 75% of Americans could easily tell news from opinion in their favoured outlet, but only 43% could on Twitter or Facebook.”
4. “The final reason for the turn against objectivity is commercial. The shift away from partisanship a century ago was driven partly by advertisers. Today, as ad revenues leak away to search engines and social networks, newspapers have come to rely more on paying readers. Unlike advertisers, readers love opinion. … The incentive to keep readers happy—and the penalty for failing—are greater than ever.”

I’ll add a fifth reason, related to number two above: objective scientific truth no longer exists, even mathematics is a false social construct! Or at least, that’s according to the Post-modernist philosophy current in American universities today. As an article on the National Association of Scholars web site puts it: “Postmodern relativism and cultural determinism—expressed through political correctness and identity politics—have permeated our culture and society as a whole, facilitated eagerly by our educational system, the media, and our cultural elites.” So, asking reporters to report the facts is fruitless, because they don’t agree there are any facts.

Is objectivity for dummies? Today’s journalist might answer “The smart money goes for moral clarity and opinions that please our audience and keep them coming back.”

One Example – Police Killings
It seems like every week brings a fresh example of a black person dying in a tussle with the police. Watching and reading the news, is it reasonable to assume that ALL police killings of civilians involve black people, and that they’re ALL egregious examples of police misbehavior?

Here’s the reality: there are probably about a thousand people killed by the police each year, and in 2019 only 25 of those were unarmed black men. Another reality – very few of these cases result in convictions of police. Remember Trayvon Martin? The admitted killer of Mr. Martin was acquitted. Remember Ferguson, MO? The prosecutor declined to prosecute. In view of the facts, pushing a narrative that says killing of unarmed black men is in any way common, and that police are typically guilty, is wrong.

Here’s a related question – how often do you hear about police killings involving Latino victims? The number of Latino victims is similar to the number of black victims, but we seldom hear about Latino victims. Why is that? Progressives, which likely include 90% of journalists, are simply not interested in crimes against Latinos, Native Americans, or Asians.

The broader point is that the press ignores the context surrounding police killings, and paints a picture that is grotesquely unbalanced. Black people are nowhere near even the majority of those killed by police; and police, if they’re even charged, usually avoid conviction.

A Second Example – Environmental Racism
Next, the New York Times. We’ve been here before – here and here. On Saturday 8/29 of this year the Times’ front page carried a graphic with the headline “Decades of racist housing policies worsen a climate crisis”. The related story on page A22 goes on to document the fact that the urban core of Richmond, Virginia is largely black, and the neighborhood is unpleasant. It alleges that this settlement pattern – black people in unpleasant neighborhoods – is a result of racism. 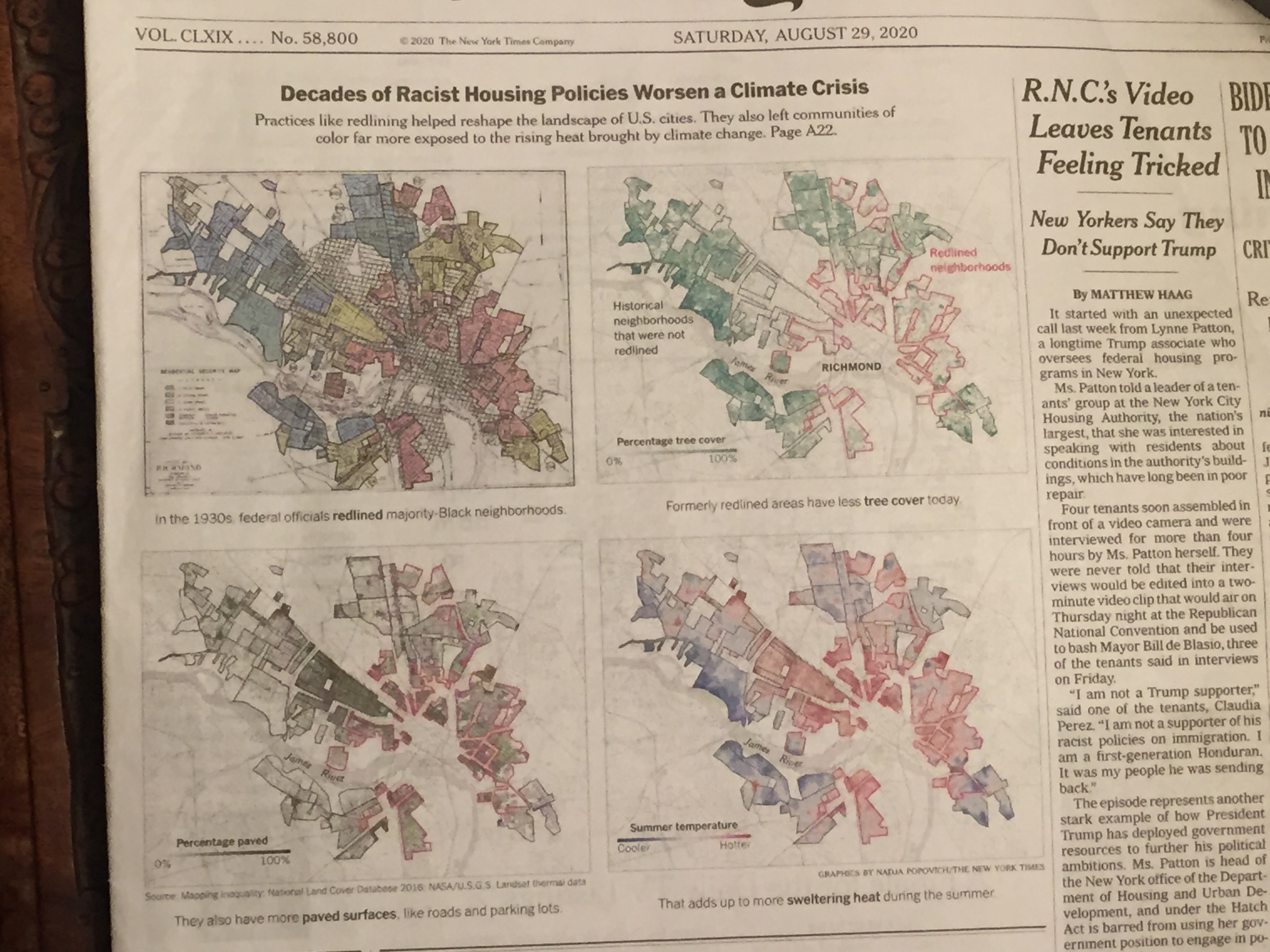 But the housing policies it refers to ended decades ago. Housing is a product, and black people today are just as free to choose a neighborhood as they are to choose a model and brand of automobile. I looked up the demographics of two ZIP codes near Richmond, but outside of the urban core to which the article claims black people are limited. ZIP code 23222 (Innisbrook CDP) has 7.1% “black or African American alone, percent”, ZIP code 23235 (Bon Air CDP) has 11.2%. Yes, black people in Richmond ARE free to move out of central city neighborhoods.

The NYT does have professional standards. The second sentence in the page headed “Our Duty to Our Readers” is this: “In print and online, we tell our readers the complete, unvarnished truth as best we can learn it.”

The Bottom Line
I resent being preached at, and lied to.
Journalists feel moral clarity! That’s nice. I wish they felt more allegiance to professional ethics.